To celebrate Afternoon Tea week I have put together a small brochure of the various afternoon tea selections that you find in some of the better tea rooms and hotels. We can supply all the bakery range (not the fillings or the imagination) for some these fantastic looking treats. Which tearoom or afternoon tea at a hotel is your favourite?

wraps in a bucket 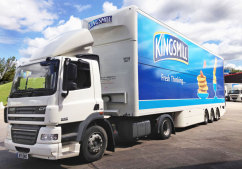 A major restructure at Allied Bakeries will see 23 management and admin roles go under review, including its category director position.
British Baker understands that the role of Martin Garlick, head of category and shopper, is one of those under consultation. Garlick has been with the company since 2013, and joined from Warburtons. At Allied, he has been responsible for the development and delivery of the Burgen Gluten Free bread launch.
The bakery giant, which owns brands such as Kingsmill and Burgen, said it would be reviewing roles at its Maidenhead and Liverpool offices, and it is anticipated that 23 roles will be impacted in total.
The company said this would make it more efficient as an organisation, as it aimed to remove cost and share activities more effectively across fewer roles.
This follows the appointment of a new managing director, Jon Jenkins, in May earlier this year.
A spokesperson from Allied Bakeries would not comment on the head of category and shopper role, but said: “We are currently consulting with our employees about the proposal. Every effort, including professional outplacement support, will be made to secure alternative employment either within Allied Bakeries, the broader ABF group or externally in their local area.
“We appreciate that this will be a difficult and unsettling time for our employees. Our proposals in no way reflect the commitment and efforts of those affected.”
The company has seen a torrid time recently, with the delisting of its sliced bread lines in Tesco. The bakery has since been increasing its volumes and is rebuilding Kingsmill’s presence in Tesco after the supermarket relisted two lines, although it said its margins remained under pressure.